Being the one to break-up: why it hurts like hell 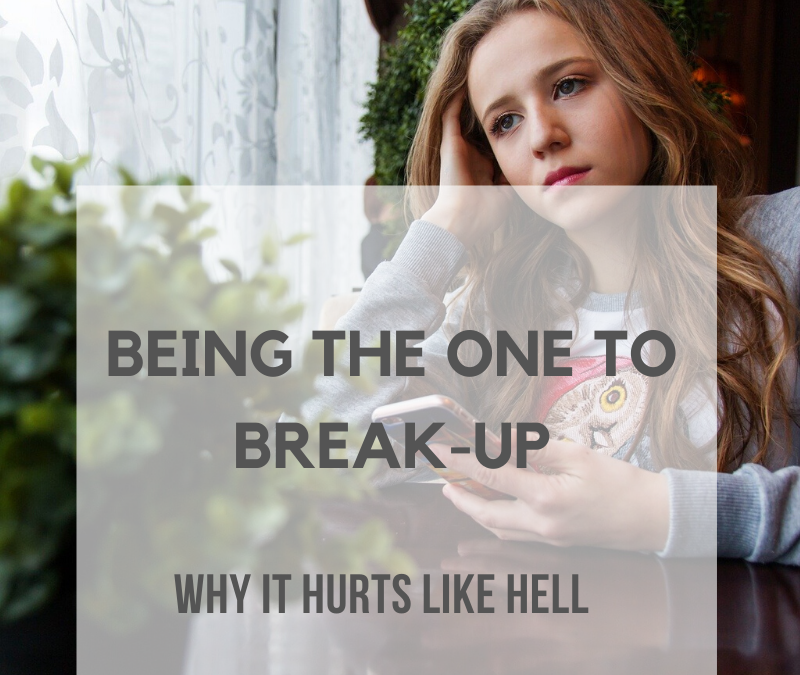 There is an increasing amount of information and advice for those who have been “broken up with.” I find it interesting to see the way that even the best books and advice are written to those in the break-up who have been left or (though I hate this word) “dumped.” What about being the one to break-up with a partner? Does that not hurt at all? Do these people not need support?

I beg to differ.

My coaching practice is called “Broken Heart Repair Kit,” partially based on my own experience coming out of a marriage. I’d like to point out that my husband didn’t leave me.  wasn’t dumped. Things unraveled for a long time and eventually became broken beyond repair and I was the one who ended things. I can’t describe what I experienced as anything less than a broken heart and I desperately sought solutions to heal.

In my language, advice, and outlook I’ve been careful to gear my break-up coaching to any woman going through a break-up, not just those who consider themselves to have been “dumped.” I know both from personal experience that being the one to really put a stop to things can be incredibly painful as well. I want my business to be a welcoming place for individuals who are brave enough to walk away.

Being the one to break-up is difficult and the experience comes with an entirely different set of challenges. Here are just four of them.

The experience of being the one to break-up

Making the decision to walk away from your dream is super f-ing hard to do.

Break-ups hurt not just because you lose someone you loved, but because you are also losing the life you thought you had. This is just as true for the person who pulls the plug. This part of the process may be different for this person because it has possibly been a long, painful decision to come to, sometimes over a long period of time.

The shock that the relationship has ended and that the future one had planned is truly gone can be just as devastating and traumatic for the initiator. Breaking up with my ex-husband was a worst-case scenario in my life and it was more painful than I can put into words. Plus, the withdrawal that accompanies separating from a partner is intense for both people involved. I’ve often found that it is, in fact, those who decided to end the relationship are actually harder to convince when it comes to no-contact. Just as much as you may know the relationship isn’t right, your system hasn’t caught up yet. This stage can last for a long time and can be very confusing if you are the one to put on the breaks.

It’s hard, but crucial, to separate the love you have for a person and the probability of future happiness. Compatibility and the likelihood of fulfillment inside of a partnership are vitally important aspects to consider when deciding to stay with a partner. The inability to get along or a serious clash in lifestyle might not have any bearing on your chemistry or on the affection you have for the person. This is especially true if you have shared a portion of your life together.

Even if you know the relationship isn’t right for you, you may still care for your partner, and it is extremely hard to see them hurt. This can be so hard that many people stay in unhappy relationships just to avoid hurting the other person, and in some cases even cheat on their partners to find a cure to their discontent.

I’ve had to look people in the eye and end things. I’ve also been really lame and kept my feelings inside because I couldn’t bear to see someone sad. It all sucks.

Looking like the bad guy isn’t really that fun

If one person in a relationship doesn’t want to break-up or accept the reality of the broken relationship, the one ending it is about to become the “bad guy,” not just to their partner, but potentially a circle of friends and family members as well. There will be a variety of responses from people who may believe you didn’t try hard enough to save the relationship. As the one to leave you may also be faced with more people wanting an explanation, which can be hard to provide (and you absolutely do not need to).

Those who leave have sometimes been mistreated

Often (NOT always), the decision to leave is a result of mistreatment or even abuse. This dynamic can make the process drawn out and incredibly painful. Individuals who have been living in unhappy relationships often carry with them secrets, misery, and deep wounds. The fact that they stayed in an unhealthy scenario is proof of how difficult the decision was and the complicated emotions involved.

One thing I’ve experienced personally is the high level of processing that I required after leaving an abusive relationship and how hard it was to do it. Once my inner circle learned about the hell I had been living in they were glad to see I had left, but not all that willing to sit and listen to me talk about what had happened. To compound matters, I was really only in a position to see a therapist once a week, and the sessions did very little to remove the weight of the last year and a half from my shoulders. It was very lonely and it was very hard to know how to move forward.

How many people could relate to the smash hit “Somebody That I Used to Know”? Part of the reason is that many can relate to the confusion and anger felt toward a person who decides to move on and away from their ex. It has become more and more fashionable to expect couples to remain friends after breaking up, and I often see accusations of immaturity thrown at those who truly want to clean break.

Talk about pressure. In a break-up that is seen as one-sided (I’m a huge believer in the concept that no break-up is actually one-sided), the person leaving may receive pressure on multiple fronts that they must show up emotionally for the other person. This pressure may be most hard to resist if it’s coming from the person you used to love and may still care about, and it is highly stressful to either avoid getting tangled up in it or to lend support only to find it makes you feel worse.

Breaking up is hard to do

If you have just walked away from a relationship, you have every right to grieve and be seen for the painful process that you’re in the middle of. I hope that you find the support and love that you need right now. I would love to provide some extra support to you as you process and journey through the upcoming weeks. Please feel free to reach out to learn about my coaching or check out my Broken Heart Repair Kit to get some daily email support.